A few months ago, when the decision to write this thing solidified, I asked Tuesday to send me a bunch of her food questions so I’d have a repository to choose from. Dependable gal that she is, Tuesday texted me a large number of inquiries and I immediately thought to myself, “I should categorize these! I should put them in a Google doc/spreadsheet/word document. I should put them anywhere other than in my text message history.” Did I do this? As you have probably already guessed, I did not. Time passed, conversations via text were had, and Tuesday’s lovely list of questions has vanished into the abyss where old text messages go. (Sorry, Tuesday. I know you’re just finding this out. I really do apologize and also can you send me all of your questions again — maybe via email this time?)

So let’s talk about chicken. Here’s my personal history with chicken: Growing up, the main chicken forms that graced my plate were what I now like to call BSCBs — boneless, skinless chicken breasts. I don’t think this is unusual; BSCBs are a thing that a lot of people eat. They are easy to deal with, they are quick, and so long as you don’t turn them into hockey pucks by overcooking, whatever. Fast-forward to high school and I became an adamant vegetarian. No meat, no thank you. That period lasted for between three and five years (see? not such a good memory) and then I moved away from that diet and shortly after onto a farm where I was helping to raise livestock — chickens included — through methods I felt good about and decided it would be ok to start eating meat again. But this time, I was curious. I wanted to become the person that can cook all of the things without spending three hours on the internet beforehand. I started with a whole chicken. I suggest this is where everyone starts because it is crazy easy and cheap and if you feel ok with eating a chicken, you will feel empowered. (Note: Hello, vegetarian friends! I see you there! You are probably not feeling empowered right now. Sorry about that, but I really want to help Tuesday to cook a chicken. Thank you for reading along (or maybe you aren’t still reading this particular post, and that’s ok too) and know that my next recipe will have a very special gift just for you.) 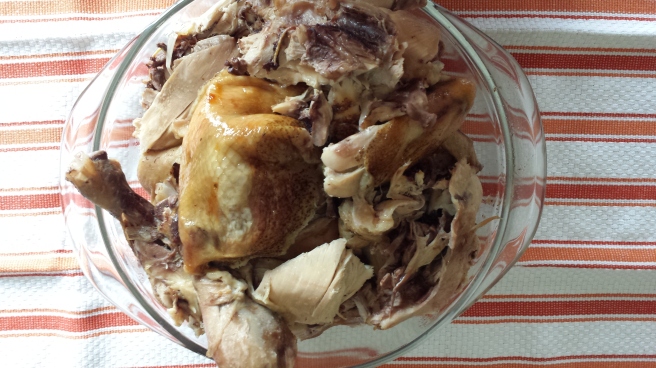 So, let’s get things in pecking order. (See what I did there?)

1. Buy a whole chicken that weighs between 4 and 6 pounds. Buy it at a farmers market or local grocery where you can get a beautiful, healthy, and happy chicken sans-antibiotics, hormones, and other gross stuff from an actual farmer while also helping small business and the local economy. Quadruple win! (If you are not yet convinced about buying the type of chicken I recommend, read THIS for further persuasion from a different angle.)

2. Get out your crock pot. If you don’t yet have a crock pot, get a crock pot; trust me. Fill said crock pot halfway with water and turn on high. Let the water warm for 30 minutes. Put your chicken in the water. Your chicken may be thawed or frozen — does not matter. I almost always cook my chicken from a frozen state because I buy my chickens from a frozen state and don’t plan far enough ahead to let them thaw before cooking. Either way is fine. One thing to remember here though is to check if your chicken still has it’s organs, which are called giblets. They may be wrapped in paper or plastic or may be free-floating. If they’re free-floating, you can leave them alone (unless you want to cook with them — then take them out), but if they’re wrapped in paper or plastic, you’ll want to remove them. Since I cook my chicken from a frozen state, I leave the chicken in the hot water for approximately an hour and then return to it and pull out the bag of organs once the chicken is less of an ice block.

3. Cook the chicken. On high for approximately six hours, or on low for eight+ hours. Personally, I often put the chicken in the crock pot right before going to bed and leave it overnight to deal with in the morning. However you choose to cook it, you’ll know it’s done when an inserted meat thermometer reads 165F.

4. Remove the chicken. The best way to do this, in my opinion, is with a pair of tongs. It will be hot, and probably break apart as you’re moving it from crock pot to bowl. Allow the chicken to cool for at least 30 minutes.

5. Pull apart the chicken. Get out one or two additional bowls. You’ll need a bowl for the chicken you’ll keep, and a bowl for bones/skin/etc. I often use the bowl I cooled my chicken in as the bones/skin/etc. bowl, but when new to this, a second bowl is really helpful. A few moments of trepidation may pass as you’re deciding where to start, but just pick up a piece of chicken and do the thing. Usable meat in one bowl, bones/skin/etc. in the other. This is definitely the trickiest part of cooking a whole chicken, but will get infinitely easier the more times you do it. 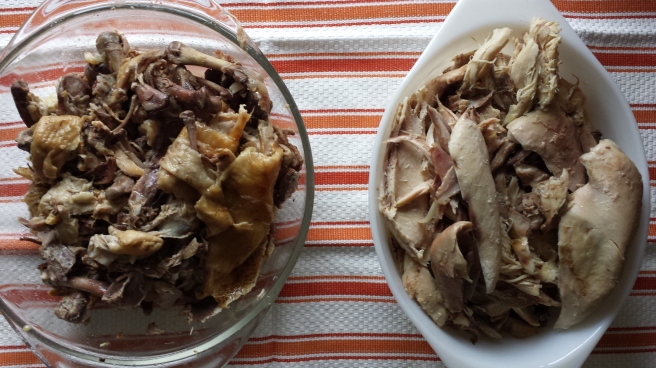 6. Make things with your chicken. Some of the things I often make are tacos, stir fry, casserole, pasta, salad, soup, and one of my favorites, which I’ll be sharing a recipe for next week, pot pies.

7. Speaking of soup, one of the awesome extra bonuses of cooking a whole chicken is that you also get a bunch of junk-free and salt-free stock that is so great to use in many other recipes. So, strain the liquid remaining in the crock pot. I do this over the sink into a large liquid measuring cup, but a large bowl would work too. Store in jars or another container and freeze until you’re ready to use it.

8. Additional pro-tip for reduced waste and extra savings: Keep the chicken bones/skin/etc. in a bag in the freezer along with scraps from carrots, celery, and onions that you use in cooking other meals. Make another batch of stock by adding the frozen chicken bones/skin/etc. and the frozen vegetables into your trusty crock pot filled with water. Cook on high for six-ish hours and strain. 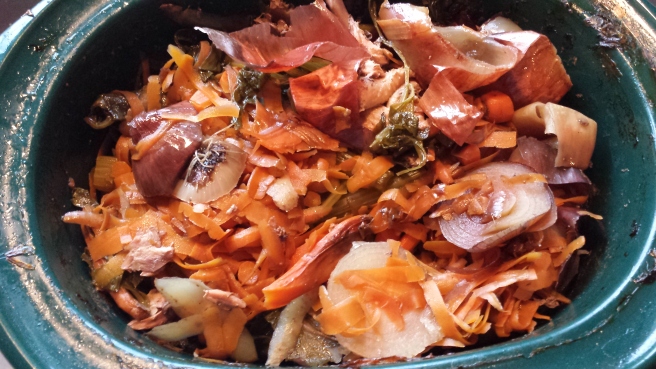 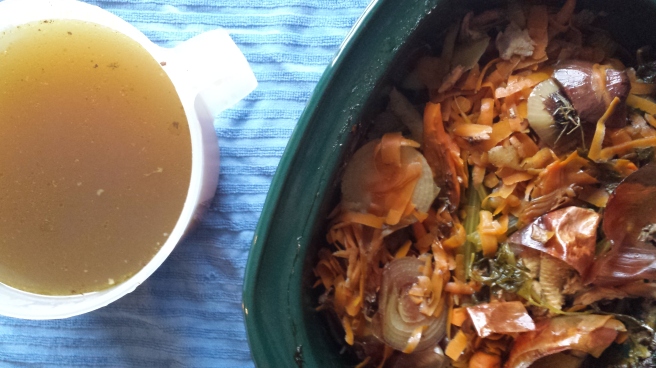 For more info, check out this post I used as a guide when cooking my first chicken.

One thought on “cooking a whole chicken”